Our festival tour is going strong as we perform throughout the mid-west in America. The appreciation people share in interviews inspires our team to do their very best in each and every program!

“We are put to test and trial in this world. Only those who attend the kirtana of the devotees can succeed.” [ Srila Bhaktisiddhanta Sarasvati ] 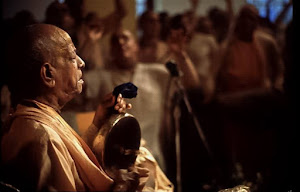 Its full House at Bhakti Center in NY. 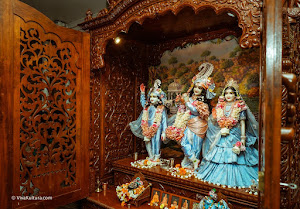 An offering to my beloved godbrother on his birthday.

Please accept my most humble obeisances. All glories to Srila Prabhupada!

I am watching your Vyasa Puja online while driving to a program in Baltimore. How much I would love to be there with you, your disciples, friends and well-wishers today. You are surely worthy of all the eloquent words being spoken at this occasion in honor of the amazing service you are rendering to our spiritual master, Srila Prabhupada and his movement.

Personally I feel you are the one specifically empowered to carry on his most cherished desire that his books to be distributed far and wide all over this planet. And because you have done it extensively, written about it in a most perfect way and are inspiring so many devotees to follow in your footsteps, you are most certainly receiving the full blessings of Srila Prabhupada and our entire disciplic succession.

This is evident whenever you deliver your eloquent, scholarly and sweet sloka-laden classes. You can’t imagine how many devotees listen to your lectures around the world … myself included.

I am very honored that you consider me a friend. Friendship is a most cherished thing in Krsna Consciousness. It allows godbrothers and godsisters to work together to offer the most substantial results to our spiritual preceptors. And the spirit of camaraderie that develops is very deep. The depth of such loving relations allow us to share intimate realizations that come from our preaching efforts — realizations that only those who serve the mission of Sri Caitanya Mahaprabhu have access to.

I so much enjoy your ongoing and perpetual explanations and vision of Sri Krsna Samkirtan. They are a great source of inspiration for me in my own attempts to spread the glories of the holy names!

So many people count on you. So many people are inspired by you. And without knowing it, so many conditioned souls are dependent on you for receiving the initial spark of Krsna consciousness.

May the good Lord always watch over and protect you and those who are serving under your most expert guidance! I pray that our paths will continue to cross for many years to come.

I want to conclude by offering my most humble obeisances to all those present today at your Vyasa Puja ceremony. They are most blessed to be your servants and order carriers! I take the dust of their feet upon my head. 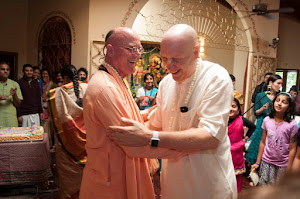 This will be the last photo album of our great adventure performing here in the USA over the last two months. Everyone in our team worked so hard day and night to share Krsna consciousness with the people of this country. In this album you’ll see our short visit to Gita Nagari and a program we held at a nearby university. Ananta Vrindavan is working on the final video. 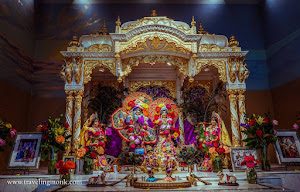